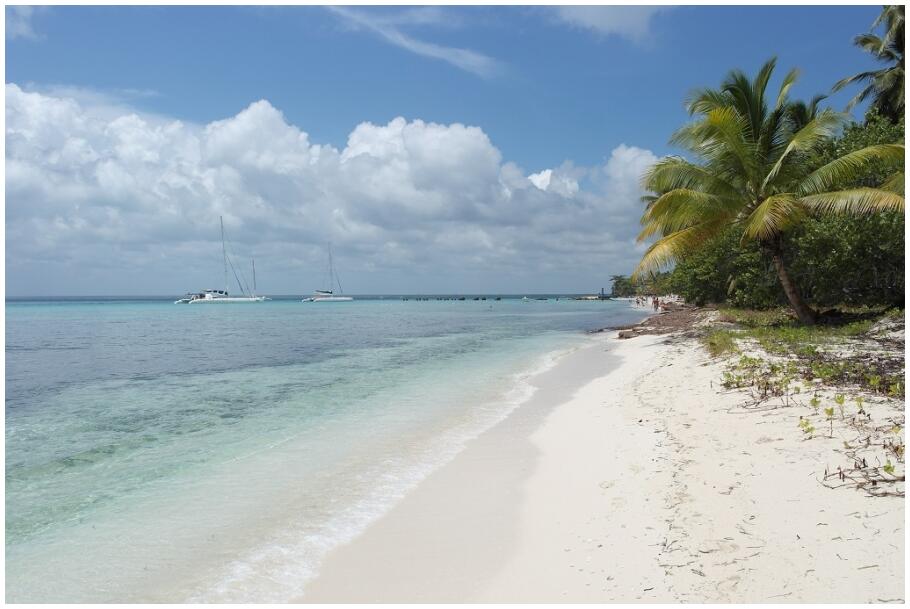 The Dominican Republic is one of the most popular travel destinations in the Caribbean. The national language is Spanish and the capital Santo Domingo is in the south of the island. The climate is warm all year round and is usually also suitable for a relaxing holiday during the rainy season.

Many travelers are drawn to the popular seaside resorts near Bavaro and Punta Cana in the southeast or Puerto Plata in the north of the island. In fact, the “DomRep” offers fantastic beaches and a multitude of great, luxurious resorts. But did you know, for example, that the country is also home to 13 national parks?

In the following we present you the most exciting tours, most beautiful attractions and best sights in the Dominican Republic. 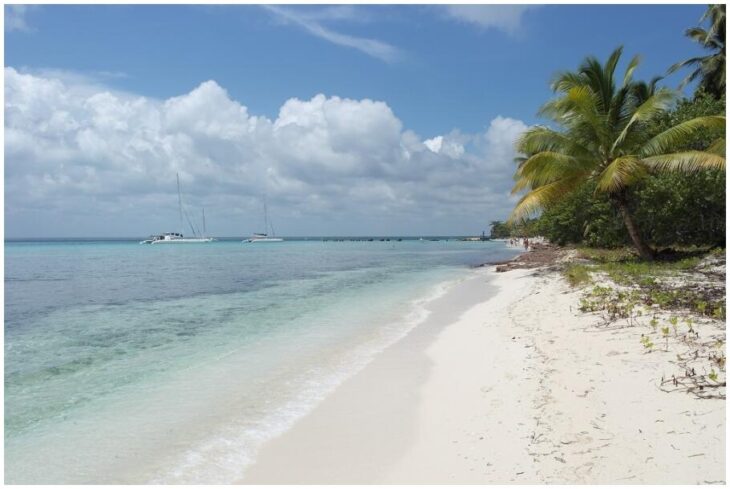 The capital of the Dominican Republic is a place of contrasts. On the one hand the modern metropolis, on the other hand the oldest city in the “New World”. In the old town, the Zona Colonial, you come across historical witnesses of the colonization in the 16th century on every street corner.

Here you will find, for example, by far the oldest cathedral in America, the basilica “Santa María la Menor”, the palace “Alcázar de Colón” in the Plaza de España, the fortress “Fortaleza Ozama” and numerous houses in the colonial style. A stroll through the cobbled streets is reminiscent of a journey through time and offers fantastic photo opportunities.

The recreated artists’ village in the Mediterranean style is the biggest visitor magnet in the region around La Romana, in the south of the Dominican Republic. It offers an art school, various restaurants and boutiques and an amphitheater with space for more than 5000 people. Concerts by big stars like Carlos Santana or Frank Sinatra have already taken place here.

The excursion combinations, which also include a boat trip on the nearby Rio Chavón, which served as the backdrop for classic films such as Apocalypse Now and Rambo, are particularly beautiful. Among other things, there is the possibility of gliding along the beautiful nature on a paddle steamer and then setting off from the river by speedboat to Saona.

Saona Island is located off the southeastern tip of the Dominican Republic and is one of the most popular attractions in the entire Caribbean. The island can be reached from Punta Cana or Bayahibe in speed boats and catamarans. The beach is a dream come true and has also served as the perfect backdrop for numerous commercials (including Bounty). Most of the excursions also include an extensive barbecue lunch under palm trees.

On Saona you have enough time to enjoy the beach and the sea or to play a round of beach volleyball. Sun loungers are available for comfortable relaxation. We recommend a short walk, because often just a few hundred meters from the boat docks you will find really untouched postcard motifs. In the late afternoon you start the return journey, with a stop in a natural pool, where you can admire colorful starfish, among other things.

The southeast coast of the Dominican Republic is known for its heavenly sandy beaches. Fine, white sand and turquoise water, protected from the surf by a coral reef about 50 kilometers long. It is the vacation dream for visitors from all over the world. Here, the beaches themselves are actually the attraction!

The most popular regions are undoubtedly Bavaro and the famous Punta Cana. Here are some of the best beach hotels in the entire country, most of them offer an all-inclusive package with extensive all-inclusive catering. The nightlife is also pulsating in Punta Cana and there are regular spectacular beach parties with the world’s most famous DJs.

The Samaná peninsula, located on the northeast coast of the Dominican Republic, offers a whole range of sights. On the one hand there are some beautiful, pristine and lonely beaches. These include Playa Rincón and Playa Bonita, to name just two. The bay of Samaná is a very popular destination, with its colorful town center and a wonderful view of the bridge in front of it.

From here the boat trips to the nearby island “Cayo Levantado”, which is probably better known as Bacardi Island, start. Whales can also be seen off the coast from January to March. Another attraction not to be missed is the Salto Limón waterfall. After an easy hike you can reach this hidden natural gem in the jungle. 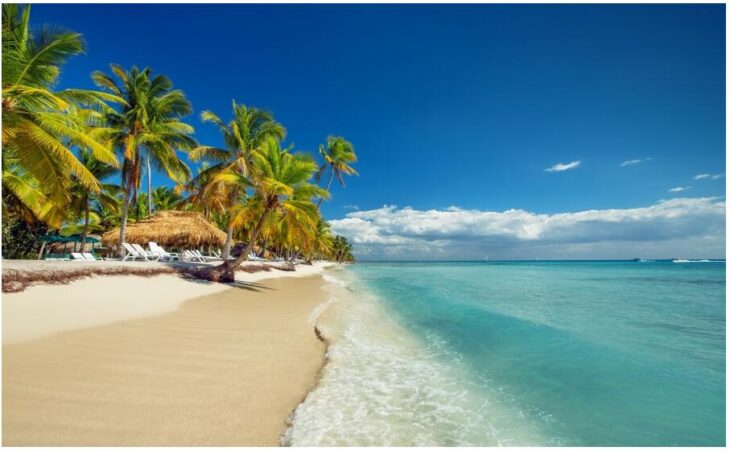 In the north of the island, in the small but very lively town of Cabarete, you will find an international hotspot for kite surfers. There is a very relaxed and cool atmosphere in Cabarete. Every year one of the most important events of the international kitesurfing scene takes place here with the Master of the Ocean. But even beginners can make their first attempts the rest of the year.

Several providers have trial courses and introductory courses on offer. If you don’t dare to go into the waves, you can also watch the spectacular goings-on from the comfort of the beach – a place well worth seeing through and through! In the evening you can relax in the lively nightlife of Cabarete with a few cool drinks.

One of the most popular attractions in the Dominican Republic is the tiny Paradise Island, often called Cayo Arena. This is located in a coral reef about 20 minutes off the north coast. There is a real Robinson Crusoe feeling when you arrive on this tiny island in the middle of the ocean. It is also ideal for beginners for snorkeling, as you can find a multitude of colorful fish in the coral reef just a few meters away in the water.

Paradise Island is an impressive experience, because the shallow clear water suddenly falls into the endless depths of the ocean and offers refuge for countless species of fish at the edges. There are many providers for this tour in the hotels on the north coast, especially in Puerto Plata. You can also organize the excursion on the beaches of La Ensenada or Punta Rucia yourself.

8. Trekking tour on the Pico Duarte

A sight for all hikers and mountain lovers can be found quite unexpectedly in the interior of the Dominican Republic. With the Pico Duarte, the highest peak in the Antilles is enthroned here. At just over 3,000 meters, this is higher than the Zugspitze, but can be easily reached on a multi-day trek. The ascent does not pose any technical requirements, just a little bit of stamina.

The Pico Duarte is located in the national park and the ascent is only allowed with local mountain guides. The tour is best organized in Jarabacoa, the largest town in the vicinity. The team at Rancho Baiguate is particularly recommended. During the tour you will spend the night in simple accommodation with a sleeping mat and sleeping bag. But the evenings around the campfire make up for all the hardships.

In the northwest of the island, around 65 kilometers from Puerto Plata, are the ruins of the first city of the New World, the construction of which was ordered in 1493 by none other than Christopher Columbus. Today’s Arqueológico-Histórico La Isabela National Park still shows many remains of the old buildings.

The city of Isabela, named in honor of the then Queen Isabela La Católica, once consisted of a civil and a military area. However, only three years after it was built, Columbus had to give up the city due to riots and disease. Shortly thereafter, the new Isabela (Nueva Isabela) was founded in the south of the island, from which Santo Domingo emerged.

10. Canyoning in the 27 Charcos de Damajagua

The special sights of the Dominican Republic include the “27 Charcos de Damajagua” (27 waterfalls of Damajagua), which are located near Imbert. Only about 45 minutes from the north coast to the south. You can either take part in an organized tour, starting from the hotels in Puerto Plata, or book a guide on site after your own arrival. The 27 Charcos, as they are called colloquially, offer a unique experience.

First you hike for almost an hour through dense forest until you reach the top of the waterfalls. That’s where the fun starts. You jump, slide and climb from water basin to water basin, always following the river. Equipped with a helmet and life jacket, accompanied by an experienced guide, this is an adrenaline-filled but very safe excursion. Afterwards, a delicious, typically Dominican lunch awaits in the small restaurant. 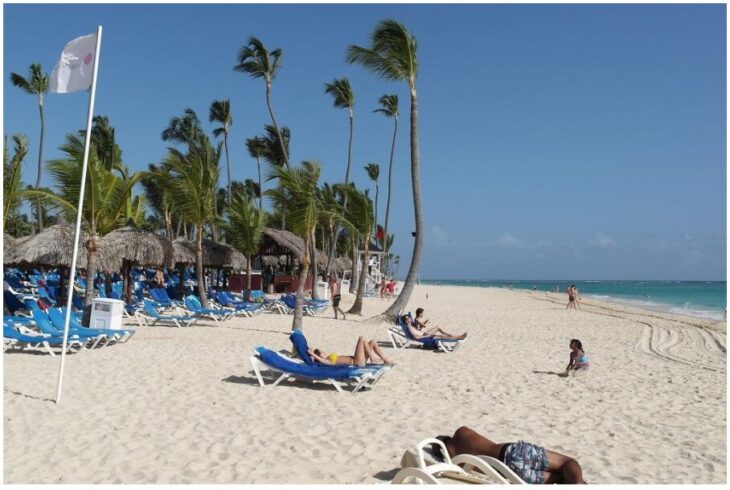