Tartu is a lively student city. Historic Tartu attracts tourists with its cultural attractions. Estonia’s second largest city is home to the country’s oldest and most prestigious university.

Tartu, also called the city of good ideas, is located in southern Estonia and is bordered by the Emajoki River, which connects the largest lakes in Estonia.

Throughout its history, Tartu has been an important center of trade and culture. Tartu is one of the oldest cities in Northern Europe and has a history of almost a thousand years. During the Soviet era, foreigners did not have access to Tartu due to the nearby military airports.

Today, when Hanseatic traders and military bases are at least mostly a mere memory, Tartu is still the cultural center and transport hub of Southern Estonia. Since Estonia’s independence, Tartu has become a serious competitor to the country’s capital Tallinn .

Tartu is especially suitable as a travel destination for city and cultural holidays. The most popular attractions in Tartu are Toomemäki, St. John’s Church, Town Hall Square and the city’s wooden house areas Supilinn and Karlova.

City holidays all year round

The Estonian seasons are very similar to the Finnish annual cycle. Summers in Estonia are longer and winters milder than in Finland.

Tartu has a continental climate. The warmest months in Tartu are the summer months from June to August, when the average daily temperatures are 15 degrees. In winter, Tartu has an average of a few degrees of frost from November to February.

Thanks to its lively student life, the city is vibrant regardless of the season.

In Tartu, which is also called the intellectual capital of Estonia, you can enjoy culture and sights. The city’s long history is evident throughout the city; there is no shortage of centuries-old buildings, churches and museums. There are dozens of museums in Tartu.

One of the most interesting museums in Tartu is the Tartu Art Museum, located on the edge of the Town Hall Square in an oblique house. The building is an attraction in itself.

Especially during the summer, many events are held in Tartu. In the city you can enjoy, for example, Emajoki’s summer theater performances, promenade concerts, music festivals and Hansa Days. Respecting the medieval market, the Tartu Hanseatic Days are perhaps the most famous event in the city and are held annually in mid-July.

Things to do for families

In addition to cultural attractions, Tartu also has something for the little ones in the family. The Aura Center is a water park and spa located right next to the city center next to the bus station. The entrance fee to the water park is about five euros.

Another place for children to visit is the AHHAA Science Center, which has plenty of fun and educational activities. The Science Center Planetarium and an exhibition of human organs and fetuses are also interesting things to see for adults. A ticket to the science center costs a little over 10 euros, a family ticket about 25 euros.

The traditional university makes its mark on the city

The University of Tartu is the oldest and most famous in the country. The proportion of students in the city’s population is substantial and is reflected in the street scene.

The main building of the university is also an interesting attraction, where it is possible to get acquainted with the art museum of the University of Tartu, the ballroom and the old basement, where the ill-behaved students were taken into custody. The downtown and Toomemäki area is full of university buildings.

As a student city in Tartu, in addition to culture, you can enjoy a lively nightlife.

FLIGHTS, ACCOMMODATION AND MOVEMENT IN TARTU

The easiest way to get to Tartu from Finland is through Tallinn, either by bus, your own car, train or by plane. There are excellent ferry connections from Helsinki to Tallinn, and you can get a round trip at the cheapest in a few dozen.

Tartu is about 180 kilometers from Tallinn and the easiest way to fold it is either by bus or your own car. The bus ride takes about three hours and costs about ten euros. For example, the new buses have wireless internet access.

Estonia is a popular motoring destination and Tartu is the country’s transport hub. The city is easily accessible and has good connections to the rest of the country.

From Tallinn you can also get to Tartu by train, which is about the same price as a bus. However, Estonian trains are quite old, and traveling by bus is much more comfortable.

Tartu has grown into a tourist destination over the last twenty years. There are already plenty of accommodation options in the city for both quality weekend getaways and backpackers. Hotels and hostels can be found both inside and outside the city center.

A hotel night in Tartu costs about 40-90 euros, depending on the desired level. In a hostel, a night costs about ten euros at its cheapest.

Take control of the city on foot

It is easy to walk in the center of Tartu, as the city is beautiful and compact in size. Regular public buses are an affordable option if you plan to head outside the city center. A one-way trip by bus costs about a euro. More travelers should get a day or series ticket.

You can also travel in Tartu by taxi, which is cheap in Finnish. However, the price is good to agree in advance.

Toomemäki is Tartu’s most popular park, which rises up from the center just around the corner from the town hall. Several of the city’s attractions are located in the park. The statues of the university’s celebrities, the observatory, the Angels ‘and the Devils’ Bridges and the ruins of Tartu Cathedral are worth a visit when visiting the park.

The cathedral, after which the park takes its name, was badly destroyed centuries ago. The partially rebuilt church now houses the University of Tartu History Museum, and from the observation decks of its restored towers you can admire the Tartu landscape.

The Town Hall Square is the heart of the city

The center and heart of Tartu is Raatihuoneentori or Raekoja plats. In front of the town hall stands a statue of kissing students, which has become a symbol of the city.

In summer, the terraces of the square’s restaurants are teeming with crowds and life.

Tartu St. John’s Church (Jaani kirik) was originally built in the 14th century, but the large building has suffered many damage during its history. It has been ravaged by wars as well as eager reformers. The church has since been restored to its original appearance.

St. John’s Church is known for its numerous terracotta statues that adorn the church both inside and out. The church is located in the Old Town of Tartu city center.

THE BEST OF TARTU 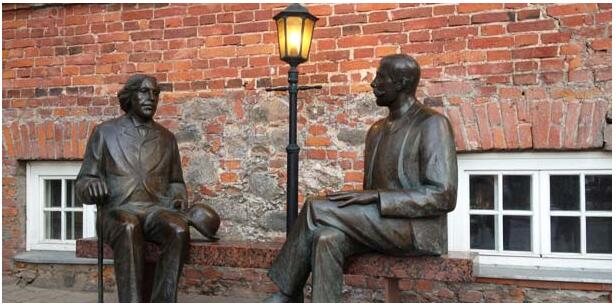 The best attractions in Tartu

The best cafes in Tartu